Rafael “Rafa” Nadal Parera (born 3 June 1986) is a Spanish professional tennis player currently ranked world No. 5. He is widely regarded as one of the finest clay-court players in history, and is considered by many in the sport to be the greatest clay-court player of all time due to his dominance and success on the surface, he has been titled “The King of Clay”. His evolution into an all-court threat has established him as one of the greatest players in tennis history,with some considering Nadal to be the greatest player of all time.

Nadal has won 14 Grand Slam singles titles, the 2008 Olympic gold medal in singles, a record 27 titles in ATP World Tour Masters 1000 events, and 16 ATP World Tour 500 tournaments. He was also a member of the winning Spain Davis Cup team in 2004, 2008, 2009, and 2011. In 2010, he became the seventh player in history and youngest of four in the Open Era to achieve the Career Grand Slam at age 24. He is the second male player, after Andre Agassi, to complete the singles Career Golden Slam. In 2011, Nadal was named the Laureus World Sportsman of the Year.

Rafael Nadal was born in Manacor, Balearic Islands, Spain, to Sebastián Nadal, a businessman who owns an insurance company, a glass and window company, Vidres Mallorca, and manages his own restaurant, Sa Punta. His mother is Ana María Parera, a housewife. He has a younger sister named María Isabel. His uncle, Miguel Ángel Nadal, is a retired professional footballer, who played for RCD Mallorca, FC Barcelona, and the Spanish national team. Nadal supports football clubs Real Madrid and RCD Mallorca. Recognizing that Nadal had a natural talent for tennis, another uncle, Toni Nadal, a former professional tennis player, introduced him to tennis when he was three years old.

At age eight, Nadal won an under-12 regional tennis championship at a time when he was also a promising football player. This made Toni Nadal intensify training, and at that time he encouraged Nadal to play left-handed for a natural advantage on the tennis court, as he noticed Nadal played forehand shots with two hands. This may be due to the fact he is ambidextrous, playing tennis with his left hand, and writing with his right.

When Nadal was 12, he won the Spanish and European tennis titles in his age group and was playing tennis and football all the time.[40] Nadal’s father made him choose between football and tennis so that his school work would not deteriorate entirely. Nadal said: “I chose tennis. Football had to stop straight away.”

When he was 14, the Spanish tennis federation requested that he leave Mallorca and move to Barcelona to continue his tennis training. Nadal’s family turned down this request, partly because they feared it would hurt his education,[40] but also because Toni said that “I don’t want to believe that you have to go to America, or other places to be a good athlete. You can do it from your home.” The decision to stay home meant that Nadal received less financial support from the federation; instead, Nadal’s father covered the costs. In May 2001, he defeated former Grand Slam tournament champion Pat Cash in a clay-court exhibition match.

Nadal turned professional at the age of 15,and participated in two events on the ITF junior circuit. In 2002, at the age of 16, Nadal reached the semifinals of the Boy’s Singles tournament at Wimbledon, in his first ITF junior event.

By the age of 17, he beat Roger Federer the first time they played and became the youngest man to reach the third round at Wimbledon since Boris Becker. At 18, he helped pace Spain over the US in the junior Davis Cup in his second, and final, appearance on the ITF junior circuit. At 19, Nadal won the French Open the first time he played it, a feat not accomplished in Paris for more than 20 years. He eventually won it the first four times he played at Roland Garros. In 2003, he had won the ATP Newcomer of the Year Award. Early in his career, Nadal became known for his habit of biting the trophies he won.

Federer and Nadal have been playing each other since 2004, and their rivalry is a significant part of both men’s careers.They held the top two rankings on the ATP Tour from July 2005 until 14 August 2009, when Nadal fell to world No. 3 (Andy Murray became the new No. 2). They are the only pair of men to have ever finished four consecutive calendar years at the top. Nadal ascended to No. 2 in July 2005 and held this spot for a record 160 consecutive weeks before surpassing Federer in August 2008.

As tournament seedings are based on rankings, 21 of their matches have been in tournament finals, including an all-time record eight Grand Slam tournament finals.From 2006 to 2008, they played in every French Open and Wimbledon final, and also met in the title match of the 2009 Australian Open and the 2011 French Open. Nadal won six of the eight, losing the first two Wimbledon finals. Three of these matches were five set-matches (2007 and 2008 Wimbledon, 2009 Australian Open), and the 2008 Wimbledon final has been lauded as the greatest match ever by many long-time tennis analysts. Nadal is the only player who has competed and won against Federer in the final of a Major on all three surfaces (grass, hard and clay), while losing to Federer only on grass.

Novak Djokovic and Nadal have met 47 times (more than any other pair in the Open Era) and Nadal currently trails at 23–24. Nadal leads on grass 2–1 and clay 14–6, but Djokovic leads on hard courts 17–7. In 2009, this rivalry was listed as the third greatest of the previous 10 years by ATPworldtour.com. Djokovic is one of only two players to have at least ten match wins against Nadal (the other being Federer) and the only person to defeat Nadal seven consecutive times and two times consecutively on clay. The two earlier shared the record for the longest match played in a best of three sets (4 hours and 3 minutes) at the 2009 Mutua Madrid Open semifinals until the match between Roger Federer and Juan Martín del Potro in the London 2012 Olympics Semifinal, which is the longest best-of-three-set match by time (at 4 hours and 26 minutes). They have also played in a record 12 Masters Series finals.

In the 2011 Wimbledon final, Djokovic won in four sets for his first Slam final over Nadal. Djokovic also defeated Nadal in the 2011 US Open Final. In 2012, Djokovic defeated Nadal in the Australian Open final for a third consecutive Slam final win over Nadal. This was the longest Grand Slam tournament final in Open era history at 5 hrs, 53 mins. Nadal won their last three 2012 meetings in the final of Monte Carlo Masters, Rome Masters and French Open in April, in May and in June 2012, respectively. In 2013, Djokovic defeated Nadal in straight sets in the final at Monte Carlo, ending Nadal’s record eight consecutive titles there, but Nadal got revenge at the French Open in an epic five-setter 9–7 in the fifth. In August 2013, Nadal won in Montreal, denying Djokovic his fourth Rogers Cup title. Nadal also defeated Djokovic in the 2013 US Open Final. In their third clash of 2014 Nadal defeated Djokovic in the 2014 French Open final. 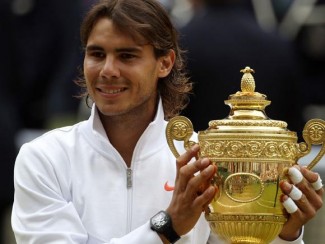