Novak Djokovic (born 22 May 1987) is a Serbian professional tennis player who is currently ranked world No. 1 in men’s singles tennis by the Association of Tennis Professionals (ATP). He is generally considered to be one of the greatest tennis players of all time and a top 5 player in the Open Era. He is coached by former Slovak tennis player Marián Vajda and former German tennis player and six-time Grand Slam champion Boris Becker.

Djokovic has won 10 Grand Slam singles titles and has held the No. 1 spot in the ATP rankings for a total of 180 weeks. By winning three Grand Slam titles in 2011, Djokovic became the sixth male player to win three Grand Slams in a calendar year. He repeated this achievement in 2015. In Grand Slams, Djokovic has won an Open Era record 5 Australian Open titles, 3 consecutive titles from 2011-2013 and is the first and only player to achieve both feats. He has also won 3 Wimbledon titles and 2 US Open titles.

Among other titles, he has won the ATP World Tour Finals five times (four of which he won consecutively and is the only player in the open era to achieve this feat) and was on the Serbian team which won the 2010 Davis Cup. He also won the Bronze medal in men’s singles at the 2008 Summer Olympics. Djokovic holds the best match winning rate (83.82%) on hard courts

He has won 26 Masters 1000 series titles, breaking a single-season record with six titles in 2015. This places him second on the list of Masters 1000 winners since its inception in 1990. Djokovic’s records include winning 31 consecutive ATP World Tour Masters 1000 series matches, playing in the finals at all nine ATP Masters 1000 tournaments (shared with Roger Federer and Rafael Nadal), and being the only player to win eight of the nine events at least once.

Djokovic is the first Serbian player to rank No. 1 for more than 100 weeks and he is the first male player representing Serbia to win a Grand Slam singles title. Djokovic has won numerous awards, including the 2012 and 2015 Laureus World Sports Award for Sportsman of the Year,[21] 2011 BBC Overseas Sports Personality of the Year and the other for the best sportsman and the best tennis player multiple times. He is a recipient of the Order of St. Sava, the Order of Kara?or?e’s Star and the Order of the Republika Srpska.

Djokovic and Nadal have met 47 times, an Open Era record for head-to-head meetings between players, and Djokovic currently leads 24–23.Nadal leads on grass 2–1 and clay 14–6, but Djokovic leads on hard courts 17–7.[187] This rivalry is listed as the third greatest rivalry in the last decade by ATPworldtour.com. Djokovic is the first player to have at least ten match wins against Nadal and the only person to defeat Nadal seven times consecutively.[189] The two share the record for the longest Grand Slam final match ever played (5 hours and 53 minutes), which was the 2012 Australian Open final.[190]

In the 2011 Wimbledon final, Djokovic won in four sets, which was his first victory over Nadal in a Major.[191] By doing so, he became the only person other than Federer to defeat Nadal in a Grand Slam tournament final. Djokovic also defeated Nadal in the 2011 US Open Final to capture his third major title of the year and fourth overall. By beating Nadal, Djokovic became the second player to defeat Nadal in more than one Grand Slam final (the other being Federer), and the first player to beat Nadal in a Slam final on a surface other than grass (Wawrinka beat Nadal in Australian open final in 2014). In 2012, Djokovic defeated Nadal in the Australian Open final which made Nadal the first player to lose in three consecutive Grand Slam finals.

At the 2012 Monte-Carlo Rolex Masters in April, Nadal finally beat Djokovic for the first time since November 2010. They had met in seven finals from January 2011 to January 2012, all of which Djokovic won. In the final at Monte Carlo, an in-form Nadal crushed Djokovic. Nadal again defeated Djokovic in the final of the Rome Masters tournament.

At the 2012 French Open, Djokovic faced Nadal in the final. For the second time in tennis history, two opposing tennis players played four consecutive Grand Slams Finals against each other. They also became the only players in history, except for Venus and Serena Williams, to have faced the same opponent in the finals of each of the four different Grand Slam events. Nadal eventually won in four sets after multiple rain delays that forced the final to be concluded on the following Monday afternoon.

In 2013, Djokovic defeated Nadal in straight sets in the final of the Monte-Carlo Rolex Masters to clinch his first title in Monte Carlo. This was his third clay win against Nadal. At the 2013 French Open semifinal, Nadal defeated Djokovic to up his record to 20–15 against Djokovic, and again at the 2013 Rogers Cup semi-final. On 9 September 2013, Djokovic lost to Nadal in the 2013 US Open finals in four sets. In 2014, Djokovic defeated Nadal in 3 sets at the Internazionali BNL d’Italia Masters 1000 tournament in Rome to claim his 3rd title there. At the 2014 French Open, they played in the final, with Djokovic attempting to capture the Career Grand Slam. Nadal won in four sets to capture the French Open for the ninth time.At the 2015 French Open, Djokovic finally defeated nine-time champion and five-time consecutive defending champion at Roland Garros, thus ending Nadal’s 39-match win streak at the French Open. He became only the second man in history to have defeated Nadal at the tournament (after Robin Soderling in 2009), and the first to do so in straight sets.

Djokovic and Federer have faced each other 44 times (not including one occasion when there was a walkover in favour of Djokovic), and they are currently tied at 22–22. They are split 4–4 on clay, on hard court Federer leads 17–16, whereas Djokovic leads on grass 2–1. Djokovic is the only player other than Nadal who has defeated Federer in consecutive Grand Slam tournament matches. Federer ended Djokovic’s 41-match winning start to the 2011 season at the 2011 French Open semifinals, which many consider to be a classic match. However, he lost to Djokovic in the following year in straight sets. Djokovic played Federer in his first Major final at the 2007 US Open and lost in three sets.

Djokovic has the second-most wins against Federer (after Nadal). The two had three encounters at the Australian Open (in 2007, 2008, and 2011), which Federer won in straight sets in 2007 and Djokovic won in straight sets in the other two. The two have met five years in a row at the US Open with Federer triumphant in their first three encounters, while their last two meetings (in 2010 and 2011) were five-set matches in which Djokovic saved two match points before going on to win. On 6 July 2012, Djokovic lost to Federer in the Wimbledon semifinal. On 12 November 2012, Djokovic won the 2012 ATP World Tour Finals by defeating Roger Federer in straight sets in the final. The two met again during the finals of the 2014 Wimbledon Championships with Djokovic emerging victorious after a 5 set match and with the victory reclaiming the world number one spot from Nadal. Federer withdrew from the 2014 ATP World Tour final and Djokovic successfully defended his title, the first walkover in a final in the tournament’s 45-year history. In the 2015 Wimbledon Championships, despite “an extraordinary second-set tiebreaker in which Federer saved seven set points to level the match” at 1–1, Djokovic went on to claim a 3–1 victory and even the lifetime record between the two players. 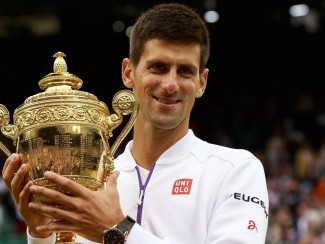