Jordan Alexander Spieth is the world number one in the Official World Golf Ranking. He is a two-time major winner and the defending FedEx Cup champion.[1]

Spieth won the U.S. Junior Amateur in 2009 and 2011, joining Tiger Woods as its only multiple winners. Before turning 18 in July 2011, he was No. 1 in the Polo Golf Rankings, which promotes the best junior golfers in the world.[6] He finished second in the 2008 and 2009 Junior PGA Championship. The American Junior Golf Association named him the Rolex Junior Player of the Year in 2009.

Spieth accepted an exemption to play in the PGA Tour’s HP Byron Nelson Championship in 2010. It was the event’s first amateur exemption since 1995. The tournament’s previous exemptions had included Trip Kuehne in 1995, and Justin Leonard and Woods in 1993.[9] He made the cut, becoming the sixth-youngest player to make the cut at a PGA Tour event.Spieth was tied for seventh place after the third round, and finished the tournament in a tie for 16th place. He was offered another exemption into the tournament in 2011, when he again made the cut and finished in a tie for 32nd.

Spieth played college golf for the Longhorns at the University of Texas.Spieth was a member of the 2011 Walker Cup team, and played in three of the four rounds, halving his foursomes match and winning both singles matches.

In his freshman year at Texas, Spieth won three events and led the team in scoring average.He helped his team win the NCAA championship, was named to the All-Big 12 Team, Big 12 Freshman of the Year and Player of the Year, and was a first-team All-American.

Spieth earned a spot in the U.S. Open in 2012 as an alternate after Brandt Snedeker withdrew; he tied for 21st and was the low amateur. He became the number one amateur in the World Amateur Golf Ranking after his performance in the U.S. Open and Patrick Cantlay’s decision to turn professional.

Jordan is the son of Chris and Shawn Spieth, both natives of Pennsylvania. His grandfather, Donald Spieth, is a music teacher at Moravian College and Northampton Community College in Bethlehem, Pennsylvania, where he was a long-time conductor of the former Lehigh Valley Chamber Orchestra.[51] The Spieths are of German descent. Jordan has two younger siblings, Steven and Ellie. Steven is a basketball player at Brown University. Ellie has grown up with disabilities and Spieth has credited her with keeping him grounded and focused as well as keeping the game of golf in perspective. He has been linked to Annie Verret, who works at The First Tee after graduating from Texas Tech. Spieth is Catholic and attends PGA Tour Bible study meetings with other players. 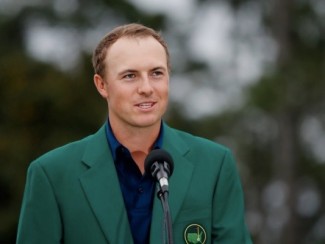