Jason Day (born 12 November 1987) is an Australian professional golfer and PGA Tour member. Day first broke into the world’s top ten in June 2011, rising to world number nine after his runner-up finish at the U.S. Open. In February 2014, Day won his first WGC title, the WGC-Accenture Match Play Championship. He went on to win his first major tournament at the 2015 PGA Championship, scoring a record 20 strokes under par and rising to number three in the world rankings. In September 2015, Day reached World Number 1 in the World Golf Ranking.

As an amateur, Day was twice awarded the Australian Junior Order of Merit. He finished seventh and was the leading amateur at the Queensland Open. Day won the Australian Boys’ Amateur in 2004. His amateur success extended to the United States, where he won the Boys 15–17 division at the 2004 Callaway World Junior Championship and was runner-up in the 2005 Porter Cup.[10] He was a member of the Golf Australia National Squad.

Day married Ellie Harvey (of Lucas, Ohio), in 2009.The couple live in Westerville, Ohio. The couple have one son, Dash, born in 2012, and a daughter, Lucy, born on 11 November 2015. On 17 December 2015, while watching a Cleveland Cavaliers game against Oklahoma City Thunder at the Quicken Loans Arena in Cleveland, Ellie sustained injuries after Cavaliers player LeBron James collided with her while attempting to retrieve a loose ball. She exited the arena in a stretcher with her head immobilized and was admitted to a nearby hospital.
He had previously lived in Orlando, Florida, and Fort Worth, Texas.

In November 2013, eight of Day’s relatives in the Philippines, including his grandmother, died during Typhoon Haiyan. 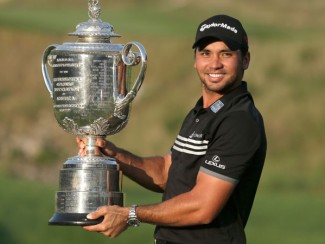