The Cincinnati Reds are an American professional baseball team based in Cincinnati, Ohio. The Reds compete in Major League Baseball (MLB) as a member club of the National League (NL) Central division. The team was a charter member of the American Association (AA) in 1882 and joined the National League in 1890.

The Reds played in the NL West division from 1969 to 1993, before joining the Central division after it was founded in 1994. They have won five World Series titles, nine NL pennants, one AA pennant, and 10 division titles. The team plays its home games at Great American Ball Park, which opened in 2003 replacing Riverfront Stadium. Bob Castellini has been their chief executive officer since 2006.

The origins of the modern Cincinnati Reds can be traced to the expulsion of an earlier team bearing that name. In 1876, Cincinnati became one of the charter members of the new National League, but the club ran afoul of league organizer and long-time president William Hulbert for selling beer during games and renting out their ballpark on Sundays. Both were important activities to entice the city’s large German population. While Hulbert made clear his distaste for both beer and Sunday baseball at the founding of the league, neither practice was actually against league rules in those early years. On October 6, 1880, however, seven of the eight team owners pledged at a special league meeting to formally ban both beer and Sunday baseball at the regular league meeting that December. Only Cincinnati president W. H. Kennett refused to sign the pledge, so the other owners formally expelled Cincinnati for violating a rule that would not actually go into effect for two more months.

Cincinnati’s expulsion from the National League incensed Cincinnati Enquirer sports editor O. P. Caylor, who made two attempts to form a new league on behalf of the receivers for the now bankrupt Reds franchise. When these attempts failed, he formed a new independent ballclub known as the Red Stockings in the Spring of 1881, and brought the team to St. Louis for a weekend exhibition. The Reds’ first game was a 12–3 victory over the St. Louis club. The Reds have played each year since then, without going on hiatus (as the Cubs did, out of necessity) or relocating (like the Braves), making Cincinnati the oldest club to have played every year of its existence in one city. After the 1881 series proved a success, Caylor and a former president of the old Reds named Justus Thorner received an invitation from Philadelphia businessman Horace Phillips to attend a meeting of several clubs in Pittsburgh with the intent of establishing a rival to the National League. Upon arriving in the city, however, Caylor and Thorner discovered that no other owners had decided to accept the invitation, with even Phillips not bothering to attend his own meeting. By chance, the duo met a former pitcher named Al Pratt, who hooked them up with former Pittsburgh Alleghenys president H. Denny McKnight. Together, the three men hatched a scheme to form a new league by sending a telegram to each of the other owners who were supposed to attend the meeting stating that he was the only person who did not attend and that everyone else was enthusiastic about the new venture and eager to attend a second meeting in Cincinnati. The ploy worked, and the American Association was officially formed at the Hotel Gibson in Cincinnati with the new Reds a charter member with Thorner as president.

Led by the hitting of third baseman Hick Carpenter, the defense of future Hall of Fame second baseman Bid McPhee, and the pitching of 40-game-winner Will White, the Reds won the inaugural AA pennant in 1882. With the establishment of the Union Association Justus Thorner left the club to finance the Cincinnati Outlaw Reds and managed to acquire the lease on the Reds Bank Street Grounds playing field, forcing new president Aaron Stern to relocate three blocks away at the hastily built League Park. The club never placed higher than second or lower than fifth for the rest of its tenure in the American Association.

The Cincinnati Reds play their home games at Great American Ball Park, located at 100 Joe Nuxhall Way, in downtown Cincinnati. Great American Ball Park opened in 2003 at the cost of $290 million and has a capacity of 42,271. Along with serving as the home field for the Reds, the stadium also holds the Cincinnati Reds Hall of Fame. The Hall of Fame was added as a part of Reds tradition allowing fans to walk through the history of the franchise as well as participating in many interactive baseball features.

Great American Ball Park is the seventh home of the Cincinnati Reds, built immediately to the north of the site on which Riverfront Stadium, later named Cinergy Field, once stood. The first ballpark the Reds occupied was Bank Street Grounds from 1882–1883 until they moved to League Park I in 1884, where they would remain until 1893. Through the late 1890s and early 1900s (decade), the Reds moved to two different parks where they stayed for less than ten years. League Park II was the third home field for the Reds from 1894–1901, and then moved to the Palace of the Fans which served as the home of the Reds in the 1910s. It was in 1912 that the Reds moved to Crosley Field which they called home for fifty-eight years. Crosley served as the home field for the Reds for two World Series titles and five National League pennants. Beginning June 30, 1970, and during the dynasty of the Big Red Machine, the Reds played in Riverfront Stadium, appropriately named due to its location right by the Ohio River. Riverfront saw three World Series titles and five National League pennants. It was in the late 1990s that the city agreed to build two separate stadiums on the riverfront for the Reds and the Cincinnati Bengals. Thus, in 2003, the Reds began a new era with the opening of the current stadium.

The Reds hold their spring training in Goodyear, Arizona at Goodyear Ballpark. The Reds moved into this stadium and the Cactus League in 2010 after staying in the Grapefruit League for most of their history. The Reds share Goodyear Park with their rivals in Ohio, the Cleveland Indians. 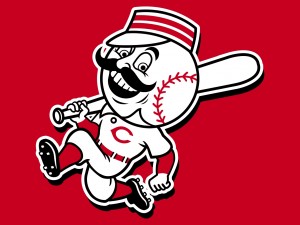