Rugby football is a type of football developed at Rugby School in Rugby, Warwickshire, one of many versions of football played at English public schools in the 19th century. The two main types of rugby are rugby league and rugby union. Although these two forms share many elements, the two codes have gradually developed with distinct sets of rules.

The Ancient Greeks and Romans are known to have played many ball games, some of which involved the use of the feet. The Roman game harpastum is believed to have been adapted from a Greek team game known as “ἐπίσκυρος” (Episkyros) or “φαινίνδα” (phaininda), which is mentioned by a Greek playwright, Antiphanes (388–311 BC) and later referred to by the Christian theologian Clement of Alexandria (c.150-c.215 AD). These games appear to have resembled rugby football. The Roman politician Cicero (106–42 BC) describes the case of a man who was killed whilst having a shave when a ball was kicked into a barber’s shop. Roman ball games already knew the air-filled ball, the follis.Episkyros is recognised as an early form of football by FIFA.
In 1871, English clubs met to form the Rugby Football Union (RFU). In 1892, after charges of professionalism (compensation of team members) were made against some clubs for paying players for missing work, the Northern Rugby Football Union, usually called the Northern Union (NU), was formed. The existing rugby union authorities responded by issuing sanctions against the clubs, players, and officials involved in the new organization. After the schism, the separate clubs were named “rugby league” and “rugby union”.

Home countries
In England, rugby union is widely regarded as an “establishment” sport, played mostly by members of the upper and middle classes. For example, many pupils at public schools and grammar schools play rugby union, although the game (which had a long history of being played at state schools until the 1980s) is becoming increasingly popular in comprehensive schools. Despite this stereotype, the game, particularly in the West Country is popular amongst all classes. In contrast, rugby league has traditionally been seen as a working class pursuit. Another exception to rugby union’s upper class stereotype is in Wales, where it has been traditionally associated with small village teams made up of coal miners and other industrial workers who played on their days off.In Ireland, rugby union is a unifying force across the national and sectarian divide, with the Ireland international team representing both political entities.

In Australia, support for both codes is concentrated in New South Wales, Queensland and the Australian Capital Territory. The same perceived class barrier as exists between the two games in England also occurs in these states, fostered by rugby union’s prominence and support at private schools.

Exceptions to the above include New Zealand (although rugby league is still considered to be a lower class game by many or a game for ‘westies’ referring to lower class western suburbs of Auckland and more recently, southern Auckland where the game is also popular), Wales, France (except Paris), Cornwall, Gloucestershire, Somerset, Scottish Borders, County Limerick (see Munster) and the Pacific Islands, where rugby union is popular in working class communities. Nevertheless, rugby league is perceived as the game of the working-class people in northern England[26] and in the Australian states of New South Wales and Queensland.

In the United Kingdom, rugby union fans sometimes used the term “rugger” as an alternative name for the sport, (see Oxford ‘-er’), although this archaic expression has not had currency since the 1950s or earlier. New Zealanders refer to rugby union simply as either “rugby” or “union”, or even simply “football”, and to rugby league as “rugby league” or “league”.In the U.S., people who play rugby are sometimes called “ruggers”, a term little used elsewhere except facetiously.

Those considered to be heavily involved with the rugby union lifestyle—including heavy drinking and striped jumpers—sometimes identify as “rugger buggers”.

In France, rugby is widely played and has a strong tradition in the Basque, Occitan and Catalan areas along the border regions between Spain and France. The game is very popular in South Africa, having been introduced by English-speaking settlers in the 19th century. British colonists also brought the game with them to Australia and New Zealand, where the game is widely played. It has spread thence to much of Polynesia, having particularly strong followings in Fiji, Samoa and Tonga. Rugby union continues to grow in the Americas and parts of Asia as well.

The Rugby World Cup, which was first held in New Zealand and Australia in 1987, occurs every four years. It is an international tournament organized by World Rugby. The event is played in the union format and features the top 20 teams from around the world.

The current world champions are New Zealand, who won the 2015 Rugby World Cup, which was played in England
The Rugby League World Cup was first held in France in 1954, and as of 2013 occurs on a 4-year cycle. It is an international tournament that is organized by the Rugby League International Federation. The event is played in the league format and features the top 14 teams from around the world.

The current world champions are Australia, who won the world cup in 2013, played in England, Wales, France and Ireland. 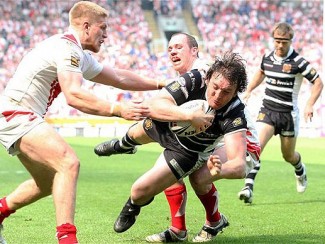