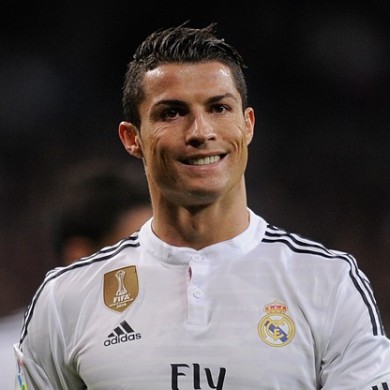 Often ranked as the best player in the world and rated by some in the sport as the greatest of all time, Ronaldo is the first Portuguese footballer to win three FIFA/Ballons d’Or, and the first player to win four European Golden Shoe awards. In January 2015, Ronaldo was named the best Portuguese player of all time by thePortuguese Football Federation, during its 100th anniversary celebrations. With Manchester United and Real Madrid, he has won three Premier Leagues, one La Liga, one FA Cup, two Football League Cups, two Copas del Rey, one FA Community Shield, one Supercopa de España, two UEFA Champions Leagues, one UEFA Super Cup and two FIFA Club World Cups.

Ronaldo began his career as a youth player for Andorinha, where he played for two years, before moving to C.D. Nacional. In 1997, he moved to Sporting CP. In 2003 he signed for Manchester United for £12.2 million (€15 million). In 2004, he won his first trophy, the FA Cup. In 2007 and 2008, Ronaldo was named FWA Footballer of the Year, and was named the 2008 FIFA World Player of the Year. In 2009 he won the FIFA Puskás Award for Goal of the Year. He became the world’s most expensive player when he moved from Manchester United to Real Madrid in 2009 in a transfer worth £80 million (€94 million/$132 million). His buyout clause is valued at €1 billion.In May 2012, he became the first footballer to score against every team in a single season in La Liga. Ronaldo holds the record for most goals scored in a single UEFA Champions League season, having scored 17 goals in the 2013–14 season. In December 2014, Ronaldo became the fastest player to score 200 goals in La Liga, which he accomplished in his 178th La Liga game.He is the only player in the history of football to score 50 or more goals in a season on five consecutive occasions.In September 2015, Ronaldo became the all-time top goalscorer in the UEFA Champions League with 82 goals, and in October 2015 he became Real Madrid’s all-time leading goalscorer.

Ronaldo made his international debut for Portugal in August 2003, at the age of 18. He has since been capped over 100 times and has participated in 6 major tournaments: three UEFA European Championships (2004, 2008 and 2012) and three FIFA World Cups (2006, 2010 and 2014). Ronaldo is the first Portuguese player to reach 50 international goals, making him Portugal’s all-time top goalscorer as well as the country’s top scorer in the European Championship with 6 goals. He scored his first international goal in the opening game of Euro 2004 against Greece, and helped Portugal reach the final. He took over captaincy in July 2008, and he led Portugal to the semi-finals at Euro 2012, finishing the competition as joint-top scorer in the process. In November 2014, Ronaldo became the all-time top scorer in the UEFA European Championship (including qualifying) with 23 goals.

On 17 October 2012, Ronaldo won his 100th cap for the Portugal national team in a World Cup qualification match against Northern Ireland (1–1) at Porto’s Estádio do Dragão. He became the third youngest European ever to reach that figure in the process, after Germany’s Lukas Podolski and Estonia’s Kristen Viikmäe.

On 14 August 2013, Ronaldo scored his 40th goal for Portugal in a 1–1 friendly draw against the Netherlands. On 6 September 2013, Ronaldo netted his first international hat-trick in a 15-minute spell in the second half at Windsor Park against Northern Ireland (4–2) in a World Cup qualification match to become Portugal’s second-highest scorer ahead of Eusébio. With his goals against Northern Ireland, Ronaldo also established a personal record, since it was the first time that he scored in three consecutive matches with Portugal.

Ronaldo scored eight goals in Portugal’s FIFA World Cup 2014 qualifying campaign, including all four of the team’s goals in the two-legged play-off against Sweden which ensured Portugal’s place at the finals. His hat-trick in the second-leg made him tied for Portugal’s all-time top goalscorer after equalling Pauleta’s record tally of 47 international goals.

On 5 March 2014, Ronaldo netted twice in Portugal’s 5–1 friendly win over Cameroon to take his tally to 49 goals, thus becoming his country’s all-time leading goalscorer.Going into the 2014 FIFA World Cup, as the team’s only star player, any Portugal success at the tournament largely rested on the shoulders of Ronaldo. However, Ronaldo was hampered by thigh injuries towards the end of the 2013–14 season with Real Madrid,and the Portuguese Football Association confirmed on 4 June 2014 that he had a “muscle injury on the back of his left thigh as well as left-leg patellar tendinitis”.On why he decided to play at the World Cup with an injury, Ronaldo stated; “If we had two or three Cristiano Ronaldos in the team I would feel more comfortable. But we don’t”.

Ronaldo regularly trained apart from Portugal’s training session in order not to further aggravate his knee and thigh problems and frequently left training early to ice his knee.Though Ronaldo was doubtful for Portugal’s 2014 World Cup opener against Germany, he managed to play the full 90 minutes as his side lost 4–0.In relation to his knee injury, on 18 June his doctor, Jose Carlos Noronha, warned Ronaldo that he risks threatening his career by playing on for Portugal at the World Cup. Despite ongoing doubts over his fitness, Ronaldo played in the second match against the United States and delivered an assist for Varela’s equaliser in the fifth minute of injury time as the match finished 2–2, keeping alive Portugal’s slender World Cup hopes. Playing with strapping on his left knee, Ronaldo scored the late winner against Ghana in a 2–1 victory, but Portugal were kept out of the qualification spots on goal difference. The strike was his 50th goal for Portugal, and he became the first Portuguese player to play and score in three World Cup tournaments.

Television footage of the 2004 Indian Ocean earthquake and tsunami showed an eight-year-old boy survivor named Martunis wearing a No. 7 Portuguese football shirt who was stranded for 19 days after his family was killed. Following this, Ronaldo visited Aceh, Indonesia, to raise funds for rehabilitation and reconstruction. After accepting undisclosed damages from a libel case against The Sun newspaper in 2008, Ronaldo donated the damages to a charity in Madeira.In 2009, Ronaldo donated £100,000 to the hospital that saved his mother’s life in Madeira following her battle with cancer, so that they could build a cancer centre on the island. In support of the victims of the 2010 Madeira flood, Ronaldo pledged to play in a charity match in Madeira between the Primeira Liga club FC Porto and players from Madeiran-based clubs Marítimo and Nacional.

In 2012, Ronaldo and his agent paid for specialist treatment for a nine-year-old Canarian boy with apparently terminal cancer. In November 2012, Ronaldo sold the golden boot he had won in 2011 for €1.5 million and gave the money to fund schools for children in Gaza.In December 2012, Ronaldo joined FIFA’s ’11 for Health’ programme to raise awareness amongst kids of how to steer clear of conditions including drug addiction, HIV, malaria and obesity.

In January 2013, Ronaldo became Save the Children’s new Global Artist Ambassador, in which he hopes to help fight child hunger and obesity.In March, Ronaldo agreed to be the ambassador for The Mangrove Care Forum in Indonesia, an organisation aiming to raise awareness of mangrove conservation.

In November 2014, Ronaldo appeared in FIFA’s “11 against Ebola” campaign with a selection of top football players from around the world, including Neymar, Gareth Bale, Xavi and African star Didier Drogba.Under the slogan “Together, we can beat Ebola”, FIFA’s campaign was done in conjunction with the Confederation of African Football and health experts, with the players holding up eleven messages to raise awareness of the disease and ways to combat it.

Ronaldo is known as a fashion icon, and is a lucrative spokesperson sought after by clothing designers, health and fitness specialists, fashion magazines, perfume and cosmetics manufacturers, hair stylists, exercise promoters, and spa and recreation companies. One example is a line of fragrances called Legacy.

He opened his first fashion boutique under the name “CR7” (his initials and shirt number) on the island of Madeira, Portugal in 2006. Ronaldo expanded his business with a second clothes boutique in Lisbon in 2008. The stores include diamond-studded belts, jeans with leather pockets and patented buckled loafers. The store also sells slinky outfits for women.

In partnership with Scandinavian manufacturer JBS Textile Group and the New York fashion designer Richard Chai, Ronaldo co-designed a range of underwear and sock line, released in November 2013.He later expanded his CR7 fashion brand by launching a line of premium shirts and shoes by July 2014.In June 2015, Ronaldo announced that he would be releasing his own fragrance by the end of the year, in a partnership with Eden Parfums.