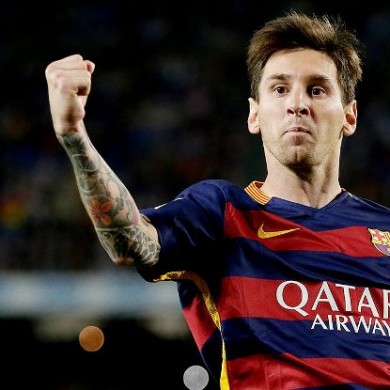 Lionel Andrés “Leo” Messi ( born 24 June 1987) is an Argentine professional footballer who plays as a forward for Spanish club Barcelona and the Argentina national team. Often considered the best player in the world and rated by many in the sport as the greatest of all time, Messi is the only football player in history to win the FIFA Ballon d’Or four times, all of which he won consecutively, and the first player to win three European Golden Shoes. With Barcelona he has won seven La Liga titles and four UEFA Champions League titles, as well as three Copa del Rey titles. A prolific goalscorer, Messi holds the Guinness World Records titles for most goals scored in La Liga (292), a La Liga season (50), a calendar year (91), a Champions League match (five), and most Champions League seasons (five).

Three successful seasons followed, with Messi winning three consecutive FIFA Ballons d’Or, including an unprecedented fourth. His personal best campaign to date was the 2011–12 season, in which he set the La Liga and European records for most goals scored in a single season, while establishing himself as Barcelona’s all-time top scorer in official competitions in March 2012. He again struggled with injury during the following two seasons, twice finishing second for the Ballon d’Or behind Cristiano Ronaldo, his perceived career rival. Messi regained his best form during the 2014–15 campaign, breaking the all-time goalscoring records in both La Liga and the Champions League in November 2014, and led Barcelona to a historic second treble.

As an Argentine international, Messi has represented his country in six major tournaments. At youth level, he won the 2005 FIFA World Youth Championship, finishing the tournament as its best player and top scorer, and an Olympic gold medal at the 2008 Summer Olympics. His style of play as a diminutive, left-footed dribbler drew comparisons with compatriot Diego Maradona, who declared the teenager his successor. After making his senior debut in August 2005, Messi became the youngest Argentine to play and score in a FIFA World Cup during the 2006 edition, and reached the final of the 2007 Copa América, where he was named young player of the tournament. As the squad’s captain since August 2011, he led Argentina to the finals of the 2014 World Cup and the 2015 Copa América, and both times was selected as player of the tournament.

Messi opened the 2015–16 season by scoring twice, both times from a free kick, in Barcelona’s 5–4 victory over Sevilla in the UEFA Super Cup. A subsequent 5–1 aggregate defeat against Athletic Bilbao in the Supercopa de España ended their expressed hopes of a second sextuple, with Messi scoring his side’s only goal. On 16 September, he became the youngest player to make 100 appearances in the UEFA Champions League in a 1–1 away draw to Roma.On 26 September, Messi sustained an injury in Barcelona’s match against Las Palmas; tests later confirmed that he suffered a tear in the medial collateral ligament of his left knee, ruling him out for six to eight weeks.He finally returned to the pitch on 21 November, making a substitute appearance in Barcelona’s 4–0 away win over rivals Real Madrid in El Clásico. Messi capped off the year by opening the scoring in the 36th minute of the 2015 FIFA Club World Cup Final on 20 December, collecting his fifth club trophy of 2015 as Barcelona went on to defeat River Plate 3–0 in Yokohama, and winning the tournament’s Silver Ball, despite missing the semi-final. On 30 December, Messi scored on his 500th appearance for Barcelona, in a 4–0 home win over Real Betis.

On 6 January 2016, recording Barcelona’s first goal of the new year, Messi scored two goals and assisted the other two in a 4–1 derby win over Espanyol at the Camp Nou, in the first leg of the Round of 16 of the2015–16 Copa del Rey.

Due to his short stature, Messi has a lower centre of gravity than taller players, which gives him greater agility, allowing him to change direction more quickly and evade opposing tackles. Despite being physically unimposing, he possesses significant upper-body strength, which, combined with his low centre of gravity and resulting balance, aids him in withstanding physical challenges from opponents; he has consequently been noted for his lack of diving in a sport rife with playacting. His short, strong legs allow him to excel in short bursts of acceleration while his quick feet enable him to retain control of the ball when dribbling at speed.His former Barcelona manager, Pep Guardiola, once stated: “Messi is the only player that runs faster with the ball than he does without it.Although he has improved his ability with his weaker foot since his mid-20s, Messi is predominantly a left-footed player; with the outside of his left foot, he usually begins dribbling runs, while he uses the inside of his foot to finish and provide passes and assists.

A prolific goalscorer, Messi is known for his finishing, positioning, quick reactions, and ability to make attacking runs to beat the defensive line. He also functions in a play making role, courtesy of his vision and precise passing, and is an accurate free kick and penalty kick taker.His pace and technical ability enable him to undertake individual dribbling runs towards goal, in particular during counterattacks, usually starting from the halfway line or the right side of the pitch.Widely considered to be the best dribbler in the world, and one of the greatest of all time, with regard to this ability, his former Argentina manager Diego Maradona has said of him: “The ball stays glued to his foot; I’ve seen great players in my career, but I’ve never seen anyone with Messi’s ball control.”Beyond his individual qualities, he is also a well-rounded, hard-working team player, known for his creative combinations, in particular with Barcelona midfielders Xavi and Andrés Iniesta.

Tactically, Messi plays in a free attacking role; a versatile player, he is capable of attacking on either wing or through the centre of the pitch. His favoured position in childhood was the playmaker behind two strikers, known as the enganche in Argentine football, but he began his career in Spain as a left-winger or left-sided forward. Upon his first-team debut, he was moved onto the right wing by manager Frank Rijkaard from this position, he could more easily cut through the defence into the middle of the pitch and curlshots on goal with his left foot, rather than predominantly cross balls for teammates. Under Guardiola and subsequent managers, he most often played in a false nine role; positioned as a centre-forward or lone striker, he would roam the centre, often moving deep into midfield and drawing defenders with him, in order to create and exploit spaces for passes, dribbling runs or combinations with Xavi and Iniesta.Under the stewardship of Luis Enrique, he returned to playing in the right-sided position that characterised much of his early career. With the Argentina national team, Messi has similarly played anywhere along the frontline; under various managers, he has been employed on the right wing, as a false nine, or in a deeper, creative role as a classic number 10 or attacking midfielder.