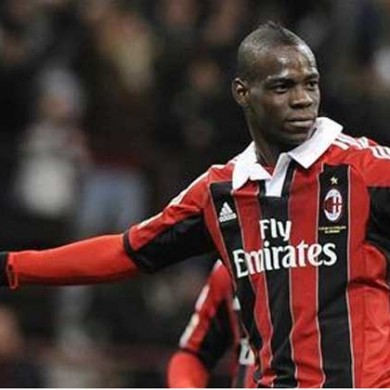 Mario Barwuah Balotelli ( born Mario Barwuah; 12 August 1990) is an Italian professional footballer who plays as a striker for A.C. Milan, on loan from Liverpool, and the Italy national team.

He started his professional football career at Lumezzane and played for the first team twice before having an unsuccessful trial at Barcelona, and subsequently joining Inter Milan in 2007. Inter manager Roberto Mancini brought Balotelli into the first team, but when Mancini left, Balotelli’s disciplinary record fell away. He had a strained relationship with new manager José Mourinho and was suspended from Inter’s first team in January 2009 after a number of disciplinary problems.

With doubts over his career at Inter, former coach Roberto Mancini had since moved to Manchester City and decided to give Balotelli a fresh chance at a new club. He joined Manchester City in August 2010, where his performances and off-field activities continued to be enigmatic and unpredictable. Balotelli eventually fell out of favour with Mancini after a “training ground bust up” between the two in January 2013.His departure from City and return to Italy with A.C. Milan followed several weeks later.After 18 months at Milan, he returned to the Premier League with Liverpool, going back on loan after an unsuccessful season.

Balotelli earned his first cap for Italy in a friendly match against the Ivory Coast on 10 August 2010. He has since amassed over 30 caps and represented his country at UEFA Euro 2012 and the 2014 FIFA World Cup, helping them reach the final of the former.

On 29 January 2013, A.C. Milan’s organising director Umberto Gandini announced that the team had agreed a deal to sign Balotelli from Manchester City on a four-and-a-half year deal rumoured to be worth €20 million plus bonuses and add-ons. Manchester City’s then manager Roberto Mancini suggested he had sanctioned Balotelli’s sale to Milan for the good of the player, describing the forward as “like another one of my children” and saying Balotelli could become one of the best players in the world when restored to Serie A. On 31 January 2013, the Serie A giants completed the signing, and Balotelli was awarded the number 45 shirt, the same number he wore for Inter Milan and Manchester City. Milan’s vice-president, Adriano Galliani, said “Balotelli in Rossoneri is a dream that has been realized. It is a transfer that everyone wanted: club, president and fans.”Balotelli received a warm reception when he returned to Milan. His arrival saw some fans scuffling with police and one policeman was taken to hospital with head injuries.[86] It was stated that Silvio Berlusconi’s signing of Balotelli would help him gain extra votes in the 2013 Italian general election.

On 3 February 2013, Balotelli made his debut for Milan and scored two goals, including a last minute penalty to earn a 2–1 victory over Udinese. The win lifted Milan to fourth in the table, ahead of Inter Milan on goal difference.[88] In the next two matches, Balotelli scored two goals, including 30 yards (27 m) free-kick against Parma. With that goal, he equaled Oliver Bierhoff’s record of four goals in first three matches for Milan.[90] In his fifth appearance Balotelli appeared as a substitute against Genoa and scored his fifth goal for his new club. In the match against Palermo, Balotelli continued his impressive scoring streak with two more goals, one from a penalty and another from an M’Baye Niang cross.

On the final day of the season, Balotelli scored his twelfth goal in thirteen games for Milan as the team beat Siena to qualify for the 2013–14 Champions League.

2013–14
On 22 September 2013, Balotelli missed a penalty in a competitive match for the first time in 22 attempts as a professional; the kick was saved by Pepe Reina as Milan lost 2–1 to Napoli.[94] During a match against Catania on 1 December, Balotelli accused opponent Nicolás Spolli of racially abusing him, but there was insufficient evidence for any action to be taken.The following week, Balotelli scored two goals in a 2–2 draw with Livorno, including a sensational 30-yard direct free kick that was clocked at a speed of 109 km/h.

Balotelli was unable to answer call-ups to the Italian national under-15 and under-17 teams as he was still considered to be a Ghanaian immigrant.

On 7 August 2007, five days before his seventeenth birthday, Balotelli received his first senior International call-up for Ghana from their coach Claude Le Roy for a friendly against Senegal at the New Den stadium in London, England, on 21 August 2007. He declined the offer citing once again his willingness to play for Italy when he became eligible. He also stated his willingness to represent Italy at international level once he acquired an Italian passport.

This is even more exciting than making my debut in Serie A. The best birthday present I could receive now would be a call to join the Italy squad, although I’d be happy to play for the Under 21 team.

Casiraghi called him to join the Italy national under-21 football team Azzurrini on 29 August for the matches against Greece and Croatia. In his debut on 5 September 2008 he scored his first international goal in a 1–1 draw with the Greek U-21’s.

Balotelli was named in the final 23-man squad for the 2009 UEFA European Under-21 Football Championships and scored the opening goal against the hosts Sweden in the 23rd minute. Barely 15 minutes later he was shown a red card for retaliating against a Swedish midfielder Pontus Wernbloom. Italy were eliminated by eventual champions Germany in the semi-finals, following a 1-0 defeat.

On 10 August 2010, Balotelli made his first appearance for the Italian senior team, as part of the squad announced by new head coach Cesare Prandelli, in a friendly match against Côte d’Ivoire – Italy’s first match after the 2010 World Cup.In that match he started alongside debutant Amauri and striker Antonio Cassano in a 1–0 loss.On 11 November 2011, Balotelli scored his first senior international goal in a 2–0 win against Poland at Stadion Miejski in Wroc?aw, Poland, also setting up Italy’s second goal of the match.