urse of the League Cup, whoever wins, discharged soon

Juergen Klopp and Roberto Martinez Manuel Pellegrini in the race to win, “Capital One Cup” this season, but history shows that this can be a curse career tyre.Në 6 of 9 years, winning managers who lifted League Cup, left the bench of the team within a few months.

In the case of Jose Mourinho, it happened twice. “Capital One Cup” may sound like a fantastic day at the “Wembley” for fans of glory and medals collected, but statistics show that this trophy club owners unsatisfied for a long time.

Jose Mourinho: Chelsea lifted “Capital One Cup” in March and in December the Portuguese tactician was dismissed from “Stamford Bridge” (only 9 months later).

Michael Laudrup: Swansea lifted the trophy in February and, having completed a year of success, “swans” of the Dane fired in February 2014 (after 11.5 months).

You Dalglish: Liverpool won the trophy in February and the legend was fired from “Anfield Road” in May (after 3 months).

Alex MekLish: Birmingham triumphed at “Wembley” in February and the coach resigned in June (after 4 months).

Juande Ramos, Tottenham won the “Capital One Cup” in February and the Spanish coach was fired in October (after 8 months).

Jose Mourinho: The first departure of Jose Mourinho “Stamford Bridge” came supposedly by consensus in September, seven months after he won the trophy in February. 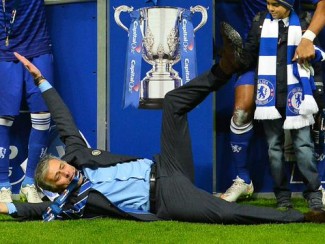