After the duel which changed hierarchies directly on top of the rankings, only 13 stages remain on the highway to send the champion title. Juventus beating Napoli ahead Blues zeroi about direct duels (in the first stage Napoli won 2-1), but took 1 point avantazh.Edhe though not yet completed, but the point, this duel of Batch will it be a war goals, because if both teams would close the championship with equal points, the title will go to the team that has the best goal difference and the actual numbers of wins Napoli.

Sarri team marks a +33 in the ranking with 53 goals scored and 20 conceded against the Bianconeri +31 goal difference (46-15). And the rules changed this year, which does not include the importance of goals in the opposing areas in direct duels clearly explains this with 5 points.

Point A – If the final order with equal points, the title goes to the team that has won more points in direct duels (Juventus and Napoli have 3 each, corresponding to respective victories)

Point B – … the title goes to the team who has the most difference of goals scored in direct confrontations, but goals in the opponent no longer apply (even here the numbers are equal, because Napoli scored twice as Juventus in the first phase, but Juventus marked as them, after gaining the “San Paolo” and that in Torino).

Point C – … the title goes to the team who have goal difference the best in the league (this is quite understandable, given that after the points and goals in duels direct, Juventus and Napoli have equal now will set goals scored of overall Serie A).

Point D – … the title goes to the team that has performed throughout the championship (this means that after the points and goal difference equal to Inter and Napoli are in direct duels, if the final overall goals scored will be the same, then it will be taken into account only the number of goals scored).

Point E – … if all the above mentioned points will have equal numbers between Juventus and Napoli, then the title will be decided with the flip of a coin. A real madness.

However, the paper is too early to make an account, though the calendar looks a bit more favorable for Juventus, because between 5 money, have already left behind victory challenge against Roma, while Napoli not. 13 remaining meetings, other common rivals who will have two leaders will be Fiorentina, Milan, Lazio, Bologna, Verona and Atalanta. 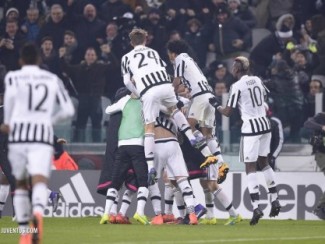