Galliani has tarnished, as few moves in the transfer market

They remain five days from the end of the January transfer window, while Milan should have left at least five players. Names, who are rumored there are plans Rossoneri, but continue again be trained, paid and be part of Milanit.Një Adriano Galliani times its golden team could find any of the above players but today seems submitted administrator to make moves in the transfer market. Fatal gave the return of Luiz Adriano, who traveled to China to sign, but returned again to be a starter in the semifinals of the Italian Cup.

Players “discarded” – Luiz Adriano became a well-known case, but at least four others should have changed squad. Goalkeeper Diego Lopez no longer plans Mihajlovic and had offers from England, but none materialized.

Nigel De Jong is another player who has not found space in red and black lineup, but he still remains. Without forgetting Nocerino and Jose Maurin, who have very little chance to play with Milan. Most- top players at the coach does not count, but in fact Adriano Galliani and Milan’s other executives failed to find them another team.

This, perhaps due to the fact that the bids have not satisfied the requirements of the players. Milan will be an achievement if the clear with zero parameters, they will benefit from the fact that they would pay their salary.

Approaches to pikatore- “In a team must have initially transfer market exit and then at the entrance.” This is the philosophy of expression and always used by Galliani. In this way, the exit of Milan Mourinho has blocked the entrance. The Rossoneri have adequate finances to make strokes and hoped that the sale of Luiz Adriano will change the situation.

The only name near the Rossoneri in this transfer market is that of Kevin Prince Boateng. Ganezi back after failing to Schalke, but the fact that there is very little play is the main problem. Transfer El Sharauit of Rome is one of the movements that can be considered successful for Galliani and Milan.

Another failure would lead to the return of “Pharaoh” were under Mihajlovic and then the attack will ward was overcrowded. Even Susosë outs and did not unlock Cerci transfer window. Attackers are seven, ranging from Balotelli, Baka, Niang, Luiz Adriano, Menez, including Boateng and Honda.

An overcrowded ward, where the difference makes only Carlos Baka. From the moment of the final gong to be close merkaton it is very few hours, but the camp still hope Vanxhoni red and black. Such transfer would save once again Galliani. 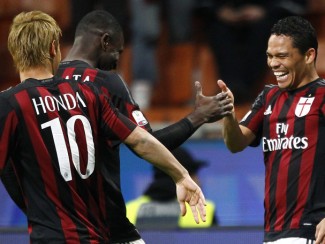