Milan, what a shame on “Bentegodi”

Hard losses for the Christian Brokit Milan. Rossoneri fall in the “Bentegodi” to the last team in the rankings. Jeremy Menez scored the lead goal for Milan in 21 minutes, while everything was equated to 72 minutes when former Rossoneri player, Giampaolo Pacini, scored from the penalty spot. Luka Siligardi scored, in the extra minutes, the winning goal for Verona. 17-year-old goalkeeper Milan was inaccessible and it took him several opportunities to realize Verona. Milan risks so sixth place in the rankings after Sasuolon now is only 1 point below and have still three weeks to finish. Milan aggregated full 53 points, six fewer than Fiorentina. Verona has closed her championship, because it is the last, five less than Frozinone and seven less than Palermo Karpin.

Roma decides the future of Totti! 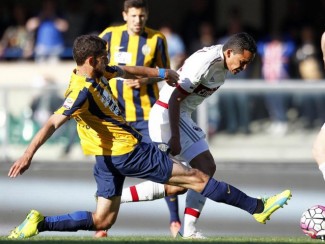